When a large mammal dies and leaves behind a carcass, have you ever wondered what happens to it? Current EU laws are strict and, within areas of conservation like nature reserves, these laws support the removal of carcasses. This can be because they’re unpleasant to look at by visitors to the nature reserve or as a precaution to prevent risk of disease transmission. But recent research has found that carcasses can actually be helpful to the environment.

New research by the German Centre for Integrative Biodiversity (GCIB) has deemed carcasses to be important, both for the environment and for the functioning of ecosystems (the wider community of organisms within the environment). The presence of carcasses can also promote biodiversity - the rich variety of organisms within a given environment. In fact, keeping dead bodies in our nature reserves and allowing them to decompose could even help save our planet!

The study by GCIB supports relaxing the removal of carcasses in areas of conservation. This is primarily because scavenger species, such as hyenas, vultures and even some species of beetle, have become more endangered across Europe. These scavengers are attracted to carcasses and feed off them. Their declines have been caused by a loss or breaking up of their habitats (a process known as habitat fragmentation) and a reduction in the availability of carcasses. The loss of predators, which provide environments with carcasses by hunting their prey, can also contribute to this problem.

GCIB worked within Oostvaardersplassen, a Dutch nature reserve, which had previously engaged in a rewilding project. Rewilding is a conservation strategy which involves the reintroduction of previously native species into a new habitat. Frans Vera in 2009 reintroduced cattle and deer back into the Dutch nature reserve. This was due to the loss of biodiversity in the reserve. This previous project was highly successful and rewilding led to an increase in animal populations, resulting in a significantly higher number of dead bodies on the reserve. However, this upset the general public, as although it was helpful to the environment, it was quite a sight to behold. Thus the reserve had to rethink its strategy. 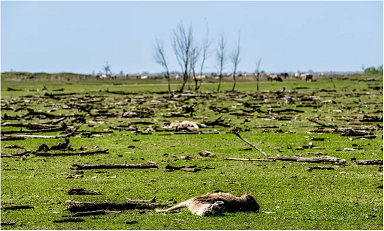 Although a landscape of dead animals can indeed be an upsetting view for visitors, the most recent study conducted on Oostvaardersplassen found many positive arguments to keep the carcasses where they are. By looking at the impact of Red Deer carcasses on the local biodiversity the study  found that a great diversity of beetle species are attracted to the bodies. These beetles can either consume the dead bodies themselves, incorporate them into their lifecycle or hunt the other species of beetle which are there to consume the carcasses.

There are carcass-eating beetles such as the carrion beetle, that bases its entire lifecycle around dead bodies. The males burrow beneath the body’s surface, where the females then lay their eggs; the larvae then live in the nourishing environment of the carcass. Rove beetles too, part of a wider family, are attracted by the smell of dead bodies. Beetles are so naturally drawn towards dead bodies that forensic entomologists can tell what has happened to a body by observing the different species of beetles which are on or in it.

As well as the local insects, the study also showed that the carcasses contribute to positive long-term growth of surrounding plants. The Welted Thistle grew five times larger around the Red deer carcasses than it grew elsewhere on the nature reserve. This, in turn, resulted in a higher volume of herbivore insects and their respective predators. Dr Roel van  Klink, head of the study, said that he hadn’t expected the carcasses to have such a powerful effect on the entire local food chain. Additionally, previous research found that carcasses boosted the growth of more plants on the forest floor, which promoted the reproduction of trees.

Here’s where dead bodies could help the planet; the generation of plant-like networks and encouraging tree growth is a priority in the current climate emergency. The causes of climate change are varied, however, human activity is a major contributor. Deforestation and the emission of greenhouse gases, such as carbon dioxide, are having a devastating impact on the environment. Deforestation often takes place to clear the way for human activities such as agriculture, and it leads to an imbalance in the amount of carbon being release and stored.

One of the main conservation strategies recommended by experts to combat climate change is reforestation. By planting trees, it is possible to encourage the uptake of additional carbon within our atmosphere. However, if we were to let the natural cycle of life and death continue without removing dead bodies from their natural environment, carcasses could potentially contribute towards a natural reforestation strategy in the future. Coupled with the benefits to biodiversity, the importance of preventing removal of carcasses from our environment is clear.

Therefore, as we move towards a cleaner planet which makes decisions based on benefits to conservation, relaxing the regulations on the removal of carcasses could increase the presence of wildlife, the growth of plants and even the reproduction of trees; a natural strategy to tackle our climate emergency. So, next time you stumble upon an animal carcass in the wild, think of its important role within our ecosystems and the legacy that the circle of life can leave behind.

Annie Wilson is an undergraduate Biology student, studying at the University of Bristol. She predominantly writes science-based pieces and press releases for scientific research, as seen in Science Daily and Nature Communications. She has also written for publications such as Twentyhood magazine, Her Campus magazine and Epigram newspaper. In her spare time, she engages in performing spoken word poetry. Her passion lies in making science accessible through communication within a political and social context facing the current climate emergency.

You can find her on social media as ann1ew1lson on Instagram which contains a lot of her poetry!