For three nights this May, over 130,000 people in countries across the world flocked to pubs, bars, cafes and community centres to hear scientists and researchers discuss their latest findings, as part of the seventh Pint of Science Festival. Over 400 cities across 24 countries took part, and in doing so attracted huge media coverage, even trending at number three in the UK on Twitter (behind the controversial Game of Thrones Finale and the even more controversial milkshake that hit Nigel Farage).

You might think the organisation behind this effort was a big hitter in terms of its finances, that surely a head office somewhere had invested silly money in a targeted marketing campaign. But you’d be wrong – the concept of Pint of Science was dreamt up in 2013 by two post-doctoral scientists, waiting for their cells to spin down in a lab at Imperial College London, and to this day is managed by a tiny central team. Pint of Science is a perfect example of how a common sense of purpose and a dedicated community can create something not only inspiring, but powerful. In telling its story, I’m going to take the opportunity to challenge some common misconceptions around science and science communication that I think all too often cause people to convince themselves that science isn’t for them.

To begin then, what is Pint of Science? To answer that question I want you to cast your mind back to the heady days of 2013 - Obama had been inaugurated for his second term, people were tucking into horsemeat burgers, and David Cameron unveiled his fool-proof plan to hold a referendum on EU membership before 2017 and put an end to all the fuss… Two researchers, Dr Praveen Paul and Dr Michael Motskin, were still reeling from the successful ‘Meet the Researchers’ day they’d run the previous month. Patients, friends and families affected by neurodegenerative conditions such as Parkinson’s and Alzheimer’s had been invited in to visit the labs and see what it was scientists actually got up to. Apart from a couple of fainters in the brain bank, the day had been a resounding success.

Here I want to flag up the first ‘misconception’ – that ‘Scientists want to be left alone to get on with their science’. The image of the eccentric solitary scientist with their chemistry set is unhelpfully prevalent and reinforces this idea. It’s true, some aspects of research science are by their nature solitary, and research can take scientists deeper and deeper into the most niche depths of a subject, until they’ve often lost touch with the very reasons they started in the first place! But it’s this aspect of research that motivates many scientists to seek out opportunities to engage with the public, and a lot of researchers enjoy opportunities to share their findings with those of us outside the community. 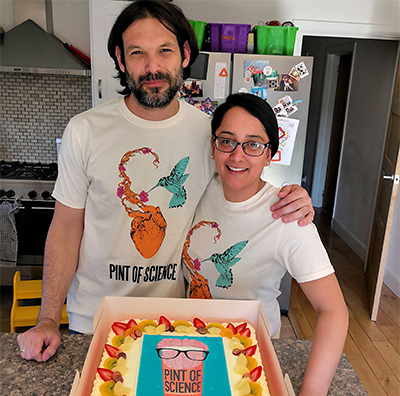 Back to our story: Praveen and Michael, inspired by their success in a conventional setting, are keen to try something new. If people will come to the lab to see the research, then why not bring the research to them? And if we’re going to bring the research to them, why not bring it to them in a place where formality is left at the door and socialising is encouraged - the pub. And so Pint of Science is born. In 2013, three cities, Oxford, London and Cambridge, host our first 45 events. Each event sees a couple of researchers giving 20-minute talks, taking some questions and having a pint with an interested public audience. 2200 people attend the events, and feedback is excellent. We garner some decent local media coverage, assisted in no small part by some big names generously agreeing to take part. One of our very first events played host to Professor David Nutt, neuropsychopharmacologist, who received high-profile media coverage (and was removed from his post as government advisor) for his views on recreational drug legality. Pint of Science was media friendly too, thanks to a catchy name and our cheery logo, Barney.

Here is where the enthusiasm of the community really kicks in. As Pint of Science 2013 draws to a close, Praveen and Misha had every intention of calling it a day, chalking it up as a fun one off. But then an email dropped into their inbox ‘Why don’t you have Pint of Science in Manchester?’ and another ‘I bet I could find a couple of people to run a Pint of Science in Glasgow’, and more amazingly still ‘Hola, porque no hay Pint of Science en Espana?’. The emails started to stack up. In 2015, I myself became one of these enthusiastic volunteers, somewhat cockily suggesting I could easily get Pint of Science Edinburgh on the go (which to my shock I was then expected to do). Pint of Science was clearly not something that could so easily be put back in a box in the lab – it was here to stay.

Fast forward to 2019, and this year I've had the opportunity to run Pint of Science UK, Michael having moved on to new things in 2018. This year we ran the 7th Pint of Science festival, the stats from which I opened this article with. We had fascinating events themed around our seven ‘festival streams’ that cover pretty much every kind of research under the sun, spanning from the particle physics that helps us understand the fabric of the universe, the future of food sustainability (including some very hands-on demonstrations of entomophagy – that’s insect eating for those that aren’t familiar) through to the neuroscience of music and so much more. We even have an entire category of events dedicated to collaborations between art and science – creative reactions. Throughout all of this eclectic science runs a through line of curiosity and a motivation to ask the questions that need answering. It’s this key message we want to distil in our audience – science is fuelled by curiosity, the desire to ask ‘why?’.

I’d like to take this opportunity to flag up my second ‘misconception’ – ‘people aren’t interested in science’. This was a genuine criticism thrown at Michael and Praveen as they began seeking assistance for the first Pint of Science festival. You can run your festival, but I wouldn’t expect too many attendees, why would anyone want to know what scientists are up to? Well this year, in the UK alone, I can confirm that over 24,500 people in more than 40 towns and cities across the UK were interested. And thanks to the spectacular effort of our volunteer community, there were 600 events ready to welcome them in pubs, cafés and exhibition spaces. We even started the Pint of Science podcast, which attracted over 10,000 listeners; clearly there is an appetite for informal science. 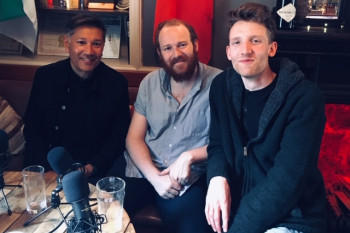 We believe Pint of Science to be of immense value, we wouldn’t bother if we didn’t. But we would say that, so we need to go a step further and ask the people involved. Our feedback each year comes from three groups – our organisers, our speakers and our attendees. Our organisers report feeling empowered by the creative experience of curating their own science festival. Volunteer organisers, mostly PhDs and post-docs, with some public engagement professionals, have complete creative control over their events – they choose the venues, the speakers and the themes of their nights. We provide support, a framework for organisation, merchandise, publicity and a platform on which to market their events. Our speakers report the benefits of speaking to a completely new audience about their science. Scientists really like the opportunity to talk at length about what they do – they’re amongst the most passionate people I’ve ever met. They also report the value of having to answer new questions from those outside the research bubble, questions that often come from the left field and force scientists to re-evaluate the way they thought about something. Our audiences report finding our events fascinating, relaxed, thought-provoking – and providing an excellent guilt-free excuse for a weeknight pub-trip!

But the value goes beyond this, and it leads me to my third misconception – that ‘science is separate from culture’. It always surprised me, before I began full-time science-communication and was still a researcher myself, that people viewed science as something to be left to scientists, not part of the repertoire of other subjects that form casual pub conversation. Arts, sport, politics, we all spend our time discussing and offering our opinions on subjects that if we’re honest, most of us still don’t understand on a ‘professional level’. Yet science has somehow ended up in an ivory tower of intellectualism. Members of my own family seem intimidated by the fact that I now have a PhD, as if it somehow proves that I can do something they shouldn’t try to question or understand. I mean not many other career paths reward your internship with a brand-new title, and I don’t think it does anyone any favours. With Pint of Science, we want to take science out of the ivory tower and into the pub and other public spaces, the property of everybody who it affects – and by that, I mean all of us.

Further, we’re living though an era when it’s critically important that people do feel confident to discuss and debate science with experts. Certain nefarious characters on the world stage are using people’s insecurities and prejudices to manipulate them, encouraging them to accept damaging and inaccurate statements blindly and not to question or criticise. Science is absolutely opposed to this, taking instead the angle that we can never state a truth with absolute certainty, only work to a theory yet to be disproved. With Pint of Science, we like to think we’re doing our bit to empower anybody that wants to engage with the science that not only surrounds them, but also affects them. We're not perfect, but we strive to improve every year that goes by.

So that’s where we’ve come from, but where are we going? What are the things we should be doing more of, where should we be focusing our efforts? Pint of Science as an organisation never set out with the mission of becoming a global phenomenon, this was something that happened because we took opportunities, collaborated with others, and above all nurtured and were supported by our colossal community of volunteers. But, with the following we’ve now developed, we have a new opportunity to address some of the problems facing science communication, and work with others to change the public engagement landscape for the better.

The goal at the heart of much public engagement is to bring science to the under-served. The British Science Association and King’s College London carried out research in 2016, results from which suggested that around three quarters of the UK population don’t typically seek out science news or events. There’s obviously no quick fix for this, in fact fantastic organisations and individuals across the sector work tirelessly to try and address the imbalance. We know there are factors beyond a person’s control that will affect their opportunities to engage with science; socioeconomic, cultural, societal, physical, the list goes on. Working with communities and partners with lived experience of these barriers to co-create new kinds of events that are relevant and of interest to people will be essential. We hope eventually to provide a platform for our academic community to work alongside their local communities to build new kinds of events to inspire and engage to the benefit of all. I believe that by working with and learning from others, Pint of Science will be able to help instil self-belief and a passion for science and research in new audiences in the years to come. And if you're interested in working with us, we'd love to hear from you.