However, when travelling through materials like water or glass, light slows down rapidly. You can test this out for yourself at home with nothing but a glass of water and your favourite teaspoon. Put the spoon in the water and you will be able to see that the spoon looks bent where the water and air meet. This is because light moves more slowly in water than it does in air. So when you look at the spoon, the light rays that were travelling slower in the water then speed up and change direction slightly when they start travelling in the air, this is known as refraction.

So now, we have put the brakes on light. Light can only travel at 75% of its speed in a vacuum in water; which means that other particles could travel faster than light if they can get up to speed! This can happen in a nuclear reactor during nuclear fission, where a nucleus is split apart and small charged particles like electrons (or positrons) are thrown out at really high speeds. Some of the electrons that are thrown out at the highest speeds are now travelling faster than the speed of light in water. When these electrons travel through the water that surrounds the nuclear reactor, they stimulate some of the water molecules in its way. These water molecules react by releasing photons of light. Together, all of these photons form a bluish glow, called Cherenkov radiation, named after Pavel Cherenkov. This phenomenon is key to helping scientists understand more about the world around us and beyond, from cosmic showers to identifying the nature of particles. 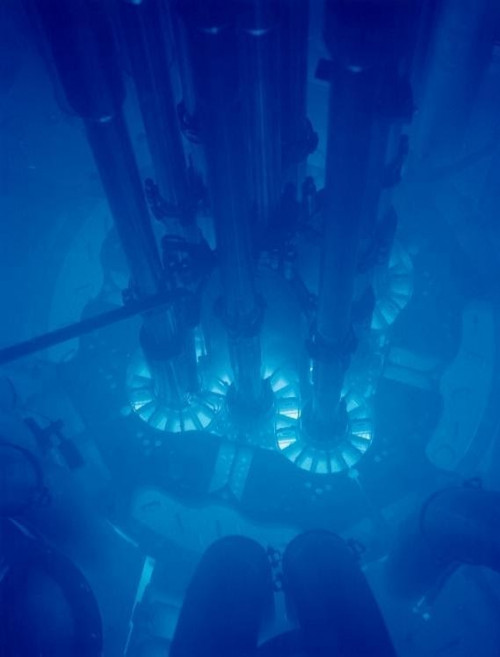 To understand why Cherenkov radiation happens, we need to know a bit more about how waves travel through space. Let's start with sound waves. When a moving sound source, such as a fire engine, travels slower than the speed of sound, the successive sound waves in front of it bunch up closer and nestle together. This increased wave frequency is the cause of the Doppler Effect; where approaching objects sound higher pitched. When an object is travelling faster than the speed of sound, like a supersonic plane, it overtakes sound waves it has created while still making new ones. These waves are forced together creating what’s known as a Mach cone. If you are standing on the ground, you won’t hear the supersonic plane before it reaches you. Once the edge of this cone reaches you, the sudden change in pressure and sound creates what is known as a sonic boom.

This blue glow is essentially a sonic boom, but with light instead of sound. Like a supersonic plane travelling faster than sound in air, the electron is now travelling faster than light in water. These emitted photons from the water molecules start bunching up, just as in our plane example, and form a cone of blue light, which can be seen with the naked eye. When you get many of these cones together, you will see an overall blue glow. 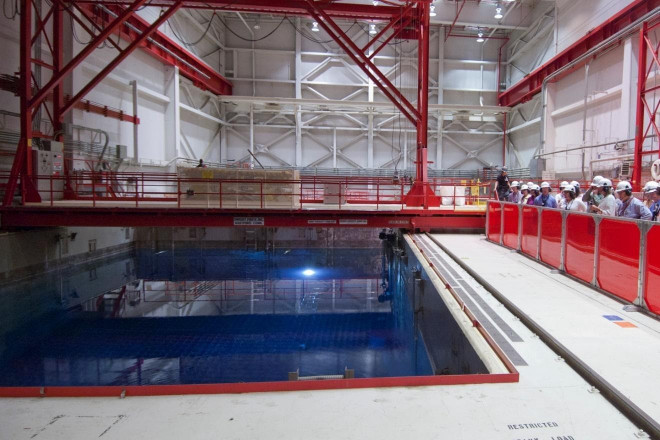 So why do we pay attention to this glow? Used nuclear material is often stored underwater in cooling ponds once it has been used. The leftover radioactivity means that fast moving electrons continue to interact with the water in the cooling pond. This can be used to monitor the radioactivity of used nuclear fuel and nuclear safeguard inspectors can study this Cherenkov light to confirm the location of radioactive materials; which is key to ensuring nuclear material is being used peacefully.