The immune system is vital for keeping us alive whereby it protects the body against invading pathogens such as bacteria, fungi, viruses and much more. Cells of the immune system recognise antigens on the surface of pathogens and once these antigens bind to receptors on immune cells, a cascade of events occur to trigger an immune response.

The immune system is more complex than people think. While protecting our body from small pathogens sounds simple, there is a network of signalling pathways, proteins and much more which are needed for the generation of such events.

We look at different types of immunity, the cells that are involved and explain some terminology involved in immune responses.

The innate system is the first line of defence and it involves barriers such as the skin and mucus which prevent pathogens from entering your body initially. The innate immune cells usually recognise the antigen at this point resulting in numerous steps to occur. For example, cytokines are released from the immune cells which are signalling proteins that can activate and warn other immune cells. As well as this, cells like macrophages can phagocytose (kill) pathogens and the complement system, which “complements” the ability of both phagocytic cells and antibodies to fight a pathogen, can become activated.

If the pathogen progresses past the above stage, then the adaptive response starts to protect the body. Members of adaptive immunity are T-lymphocytes (T-cells) and B-lymphocytes (B-cells).

The antigen can bind to a specific B-cell receptor and the now activated B-cells can then produce antibodies which are also known as immunoglobulins (Ig). Antibodies may remove these antigens through neutralisation or opsonization (tagging foreign pathogens to be eliminated).

Many therapeutics consist of engineering and manufacturing antibodies to fight diseases. A clone of a single B-cell can be used to make ‘monoclonal antibodies’ which bind to the part of a particular antigen (known as an epitope). For example, adalimumab (Humira®) is a monoclonal antibody with anti-tumour necrosis factor-alpha (TNF-alpha) properties which is used to treat rheumatoid arthritis. 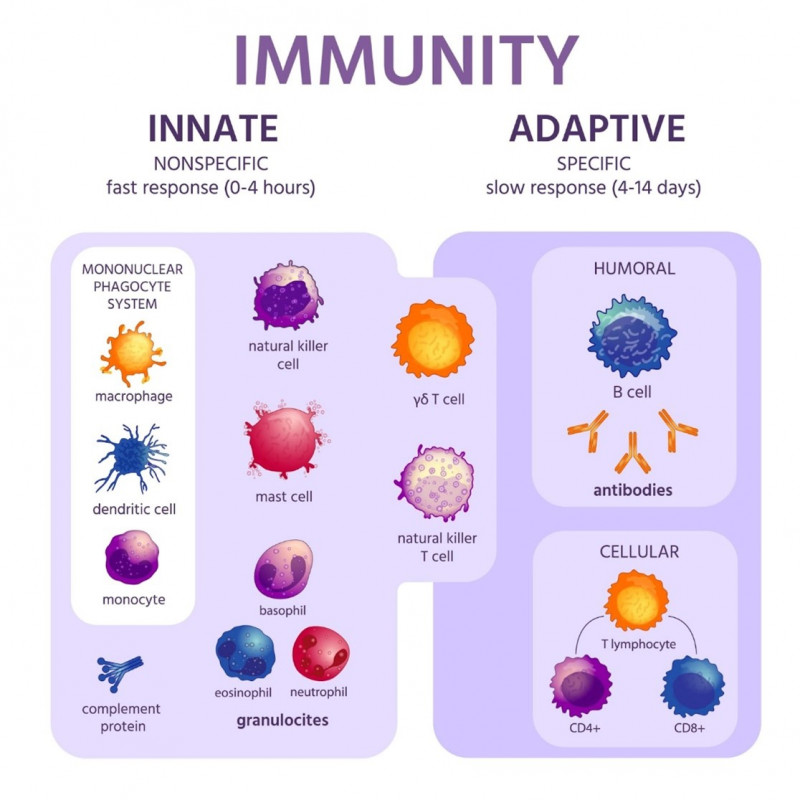 Innate immunity consists of the skin and membranes for a first barrier of defence against a pathogen which can lead to inflammation and a fever developing. The main cells of the innate immune system are DCs, NK-cells, macrophages and epithelial cells. Adaptive immunity consists of plasma cells, B-cells and T-cells (T helper and T killer cells).

The adaptive immune response takes a lot longer than the innate immune response and can take days/weeks to become properly established. The key with adaptive immunity is that it tries to prepare for future challenges which may present themselves again. Memory B-cells are important for this function because they circulate in the bloodstream in an inactivated state until they come into contact with an antigen which has caused an infection in the body before. They memorise the characteristic of an antigen which their parent B-cell was previously infected with, leading to a more rapid and robust immune response.

T-cells can recognise an antigen which is displayed on an antigen presenting cell (APC) such as Dendritic cells and B-cells. Depending on the cluster of differentiation (CD) marker on the T-cell, it is either a CD4+ T helper cell or a CD8+ cytotoxic T killer cell. The T helper cells activate cytotoxic T-cells to perform their function of destroying infected cells.

Homeostasis refers to the body's ability to maintain physiological processes in order to keep internal states balanced. Usually there is a homeostasis in the body. But if there is a tip in the balance towards inflammation, auto-immunity can occur. If the balance tips in the opposite direction where there is less of an immune response, then diseases such as cancer can persist. As mentioned, there are many members of the immune system which come together to fight an infection and similarly there are equally as many members of the immune system which help to maintain homeostasis on a regular basis.

Overall, without a good healthy immune system, we wouldn’t be able to attack invading pathogens, recognise harmful substances or fight disease-causing changes in the body such as cancer.