Despite the human and octopus lineages being separated by 500 million years of evolution, we still share some similarities in the ancient neurotransmitter systems that form a key part of the way our brains work. In this time octopi developed several extra legs and humans went on to dominate the globe using just two, and on the way, we discovered several substances which can profoundly alter our brains’ neurochemistry. In this article I'll share some recent research from this fascinating field.

Neuroscientist, and lead investigator of the study, Dr. Gül Dölen from John Hopkins researches how neural functions can give rise to complex social behaviour. Octopi are not entirely dissimilar to teenagers in that they are generally extremely anti-social and solitary, with the sole exception of when they come together to mate. As she puts it, “During reproduction they are social for three minutes while they mate and then they go back to wanting to kill each other” (Octopi, not teenagers). Therefore, she and her team asked the interesting question of what is going on in the brain of an octopus during this switch.

Despite sounding like something drunk university students might joke about at 3am, giving MDMA (ecstasy) to octopi provided some unlikely insights into the ancient origins of social behaviour. To test the effects scientifically, the investigators took an established three-chamber paradigm used to study rats’ behaviour, and made it underwater. The octopus is given freedom to choose to spend its time in one of three spaces; an empty central room, one with an interesting object, or one with another octopus. 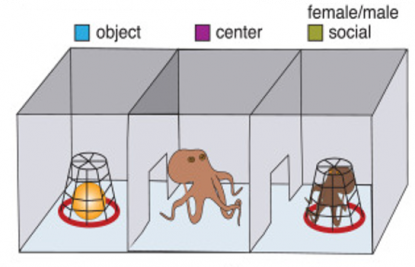 Chambers used in the experiment

When they put sober octopi into this situation, they tended to spend significantly more time with the interesting object, in this case, an action figure. However, following a 10 minute bath in MDMA solution, they spent significantly more time in the chamber alongside the other octopus. However, the more interesting findings were in the qualitative differences in the way high octopi behave.

The sober octopi generally avoided going near the other octopus, and when they did, contact was limited to a single-arm poke. However, when given MDMA, the octopus will engage in extensive ventral surface contact – a fancy way of saying it becomes more huggy. “They’re basically hugging the [cage] and exposing parts of their body that they don’t normally expose to another octopus,” said Dölen. 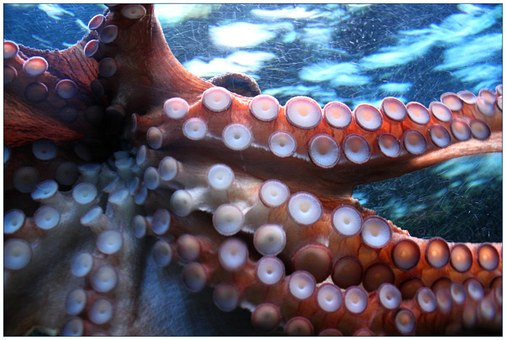 They also displayed behaviours that, while not exactly the same, certainly reminiscent of what you might find at a music festival. As Dölen puts it, “Some were being very playful, doing water acrobatics or spent time fondling [a stream of bubbles]”. Others simply stretched out their arms and floated about.

It is hard to overstate how remarkable it is that MDMA can have even vaguely comparable effects on both octopi and humans. The nervous system of the octopus could hardly be more different than our own; roughly two-thirds of their neurones are located in their arms (which are thought to function semi-autonomously) rather than their central brain. MDMA acts by changing the levels of the neurotransmitter serotonin.  This research therefore provides evidence for a more prominent role of basic neurochemistry in complex social behaviours, which is in contrast to the broad notion that behaviours in humans arise from nuanced circuitry.

Prof David Nutt, a world leading expert on the neuropharmacology of illicit drugs at Imperial College London, has suggested that this study may be yet another blow to anthropocentrism – the notion that humans are uniquely important within the universe – and other species could also have the capacity for complex social mechanisms such as emotion and empathy. “This just proves that this is not some peculiar human characteristic, it’s not even a mammalian characteristic, it’s a characteristic of brains,” he said. “It also shows that serotonin has a hugely important role in mediating social interactions right across species.”

The scientific landscape is changing and illicit substances are offering unique and fascinating opportunities to examine questions at the forefront of scientific investigation. The fact that humans and octopi show similar responses to MDMA provides hope for future researchers using other animals to elucidate further neural processes. It also suggests that these drugs could offer benefit to patients with different neurological and psychiatric disorders. What’s next? Giving weed to giraffes to study vertigo? Adderall to squirrels to study ADHD? There has never been a more exciting time to be a neuroscientist…

Tim Lawn is a neuroimaging PhD student at King's College London, with a keen interest in high octopi.