“It's night before it’s afternoon. December is here before it’s June. My goodness how the time has flewn. How did it get so late so soon?” Dr Seuss

In Coronavirus lockdown, time has simultaneously slowed to a crawl and sped up to a sprint, the days have both doubled and halved in length. In this messed up time warp, I still manage to turn up late for all my Zoom calls and systematically forget which night to put my bins out. Instead, I’ve spent most of my spare time thinking about… well, time.

We know people have been puzzling over the nature of time for centuries. Over 1500 years ago, the Algerian monk Augustine wrote, “What then is time? If no one asks me, I know; if I want to explain it to a questioner, I do not know.”

Take a second to think of a definition of time that a) doesn’t presuppose time and that b) doesn’t use any linguistic markers of time.

It’s hard, right? Nonetheless, the very existence of the word means we have a shared conceptual understanding of time, even if we can’t explain it. Augustine had a stab at a definition, suggesting that the past is just memory and the future is the anticipation of time to come. To be honest, that’s pretty much how I feel right now: life before confinement feels like a distant memory and the future is my impatience of picnics to come.

So could it be that time is a construction of human imagination?

Probably not. If time didn’t exist outside human consciousness, we wouldn’t be able to account for the existence of dinosaurs or the history of the universe. We have pretty strong evidence to think the universe spent most of its time without us, so it’s safe to assume that time doesn’t need the consciousness of an observer to exist. Even human-made time telling devices don’t take a break from ticking when we look away. The change in location of the hands of a clock, just like the position of the Sun in the sky, allows us to equate physical time to the observation of regular changes in physical properties.

So if time is the expression of a measurement, what exactly is being measured?

Thanks to Einstein, we think of time as the fourth dimension. The combination of the three dimensions of space and the one dimension of time is (creatively) called spacetime. Spacetime allows us to conceptualise the duality of time used to measure properties of space, but also altered by the properties of space.

According to the Theory of Relativity, the faster an object moves through space, the slower it moves through time (see the Twin Paradox) and the greater the gravitational pull, the slower time passes. We can observe this on top of Mount Everest, where clocks tick about 30 microseconds a year ahead of those at sea level. This altering, or bending, of time gives weight to the idea that there is no cosmic clock and that, to quote Margaret Atwood, “time is not a thing that passes, it's a sea on which you float.”  We appear to move through time, just like we move through space. However unlike moving through space, Einstein’s time is a one way street. The arrow of time points to the future and never looks back. 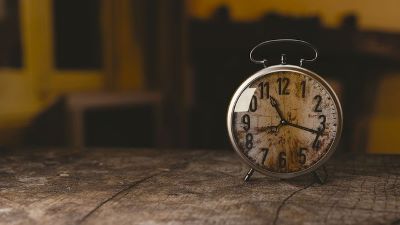 Spacetime and the Theory of Relativity have an impressive descriptive and predictive capacity for all cosmic phenomena, except… on the quantum level. Relativity and quantum mechanics coexist happily on most points, but differ fundamentally when it comes to one question: time. In a nutshell, relativity describes time as malleable and monodirectional. Quantum Mechanics does not.

The Holy Grail for physicists today is finding one elegant theory that would reconcile the paradoxes between the macro (relativity) and the quantum. Such a theory would be able to describe everything. It would be the Theory of Everything.

As the conceptions of time in Relativity and Quantum Mechanics are so radically different, physicists have gone back to the drawing board to rethink everything we thought we knew about time. Is time an independent and absolute phenomenon after all? Is time an expression of something more fundamental than itself? Does time exist at all?

On the more extreme end of this reflection is the Wheeler-DeWitt Theory which doesn’t include time in any of its equations. If this turns out to be true, it would mean that on a fundamental level, the universe is timeless and our conception of time is just an illusion.

Many of the current competing contenders for the Theory of Everything, such as Loop Quantum Gravity, talk about time as being an emergent property of causality. Just like a tide can only exist in an ocean, this means that it cannot exist outside of a system as a whole. The movement is both real and an illusion. If this is the case, at the fundamental level, the universe is a collection of events not ordered in time but linked by causality which on a macroscale, are experienced as smooth and regular time.

Even though we exist on a macroscale, this is what many of us in self isolation are experiencing. Without our usual activities and interaction (the ocean), it seems to be difficult for us to perceive the passing of time (the tide). Could this explain the “Blursday” effect? In the absence of our 7am alarm, Wednesday yoga lesson… and all our other temporal markers, what happens to our experience of time? And if our experience of time changes, what happens to our sense of meaning?

About the Author
Sarah de Launey is a science exhibition designer and long time Pint of Science volunteer. She is passionate about maths and picnics. You can find her on twitter @sarahdelauney