Galaxies are full of life. Creatures many and varied roam the galactic plain, each with their own distinctive displays. These creatures aren't aliens but the oceans of gas and dust illuminated by low-energy, radio waves; stars at all stages of their life shining through the infrared, optical and ultraviolet; and the more exotic species emitting in the extremely energetic gamma and X-ray regions. At the heart of this habitat, hidden among all these flamboyant displays, lies the supermassive black hole. Often thought of as dark, isolated and enigmatic, at some point during a black hole’s life it will feed and become a very different beast altogether, an active galactic nucleus (AGN). When this happens, the previously enigmatic black hole becomes the centre of attention with the AGN emitting across the electromagnetic spectrum in much greater quantities than all the other inhabitants. But how do we know black holes power these AGN? What do they eat? And why do we care?

Inhabitants of the Milky Way, the galaxy which we call home, are in a constant orbit around its centre. For as long as this behaviour has been observable, its cause has been a mystery but studying the motions of the stars, gas and dust can help illuminate it. In particular, the speed and shape of their orbit tells us that at the Milky Way's heart lies an unimaginable amount of mass crammed into a tiny region of space. A supermassive black hole. 4 million suns of mass are compressed in a single point, the singularity, which produces a huge gravitational force. Through this force, the supermassive black hole bends the will of the rest of the material within their host galaxy into orbiting around it, in the same way the planets of the Solar System orbit the Sun. Some even argue black holes are the reason their host galaxy exists at all. Across the local universe, this method has shown supermassive black holes are more common than you might imagine: the largest galaxies in the universe all have black holes at their heart. And like a ravenous animal, they must feed.

Black holes are patient. They hide in plain sight waiting for their unsuspecting prey to arrive before dragging it down into their depths to feed. Black holes are surrounded by a huge ring of gas and dust orbiting at almost the speed of light, an accretion disk. When new material is dragged down it rubs up against old, causing their orbits to become disturbed. In the same way an incandescent lightbulb emits visible light as electrons heat a high resistance filament, when this material reaches the accretion disk something spectacular happens. Friction builds up, temperatures soar, and soon the disk is bathed in light from across the electromagnetic spectrum. The AGN is unleashed. For galaxies hosting large central black holes this is their most extreme source of X-ray emission, drowning out most others in the immediate vicinity. All that is required is the position and magnitude of this X-ray emission to suggest the existence of an AGN; a celestial X-marks-the-spot. 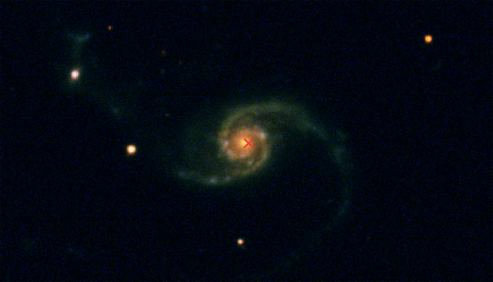 Searching the skies for these celestial marks can help us understand more about the black hole's feeding habits. Naturally, a black hole can only feed in a habitat that can provide food, so by observing AGN activity we know the black hole lives in a suitable host galaxy. By identifying how frequently AGN occur across a range of galaxies we can better understand their preferred conditions: do AGN prefer a smaller habitat like a dwarf galaxy, or a higher-mass host, and is there anything special about the shape, age or metal content of the galaxy? We also find that not all black holes have the same appetite: some are incredibly greedy, consuming material at huge rates whilst others show more restraint. Once the material is used up, however, the AGN emission disappears.

For now, the black hole is full, but for us it's merely a starter. X-ray studies like this are fantastic at guiding us to the black holes' favoured feeding grounds but as we've discussed, AGN emit a smorgasbord of radiation. Just as we can't learn about birds solely from their song, we must consider the whole of the electromagnetic spectrum, not just these X-ray studies, to truly understand the feeding habits of black holes.

Keir is a PhD student at the University of Leicester who studies the relationship between supermassive black holes and their host galaxies. When not doing science, he can be found behind the lens of a camera or listening to the strangest music possible. You can follow Keir on Twitter @keekslb