If you go back through the Pint of Science blog, you’ll find a post from late 2019 from the Manchester team called ‘How it’s made (Entry #1)’. The author mentions how their hard work will be made worthwhile by “a pub full of people” and discusses her excitement regarding “those three fantastic days in May”.

You may be aware that between the end of 2019 and May 2020, the Pint of Science festival came up against a slightly larger challenge than they signed up for. With pubs closed and plans on hold, there was a need to transition Pint of Science online. I was not involved with the festival last year, but the finished product shows how admirably the team stepped up to the challenge; those three days can’t have been anything like what the author imagined, but they were still fantastic.

This year has presented Pint of Science with another unique challenge: planning, from scratch, the first intentionally online Pint of Science. This post is, in a way, a spiritual successor to Entry #1. A ‘How it’s made (Entry #2)’, taking a peek behind the virtual festival curtain at the people involved, the work we do, and the new important questions to address: how do you engage an audience through a webcam? What topics are best suited to an online festival? Can I still have a pint with me whilst presenting, even though I’m not technically in a pub?

Like most of the current Leeds team, I first got involved with Pint of Science in late 2020, through the enthusiastic recruitment drive of Alex Holmes, the Leeds city coordinator. Alex’s job is everything and anything: scientist wrangler, team glue, and self-confessed but sorely needed micromanager. The coordinator role is important because a single city can host several events of the course of the festival. In fact, the Leeds team are running three shows this year; on the themes ‘Tech Me Out’, ‘Beautiful Mind’ and my team’s topic ‘Our Society’. 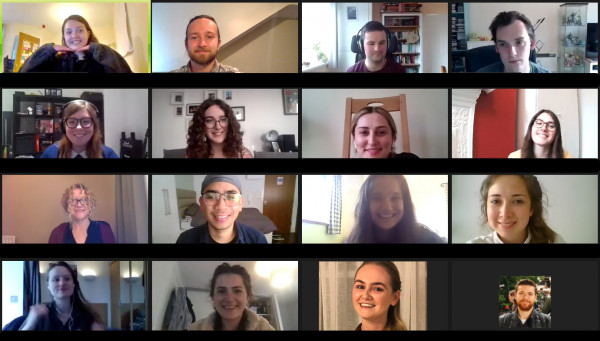 The Leeds team meet on Zoom to discuss the upcoming festival

The 'Our Society' team began meeting at the end of January 2021 and spent February trying to come up with ideas to fill our intentionally vague theme title – we'd been so excited to get involved with Pint of Science it came as a bit of a shock now we'd been given our own show to organise. Luckily, what our small team lacked in immediate ideas, we made up for in passion. After a couple of enjoyable Zoom calls throwing ideas back and forth, we found our individual thoughts neatly dovetailing together into some semblance of a plan. Our team was blessed with a diverse collection of scientists, in a range of fields and careers. Despite the vast differences in core fields (I couldn’t begin to tell you the first thing about Alex’s economic modelling, or Ben’s computational biophysics) we found our interests intersecting at the common core of science. We all felt that clearly answering the most basic questions – the who, what and how of science – was an incredibly simple yet important topic to communicate to the public.

By March we had shaped our ideas into an outline and submitted an abstract. Ben and I would address the ‘What?’ of science, Alex would cover the ‘Who?’ and Izzy would finish with ‘How’ science is conducted and communicated. Last but certainly not least is Chris, undoubtedly the most experienced public speaker in our team, and the only team member not giving a talk. This seemingly counterproductive decision hopefully illustrates the whole team’s opinion that Pint of Science’s value is in communication first, science second, and therefore Chris’s job as emcee is the most important of all.

I’m writing this in early April, about six weeks before the festival. Preparing presentations and running through them as a team makes it feel more real, which is simultaneously exhilarating and terrifying. I realise that I’ve never done a presentation like this before - there’s extra pressure not to mess up when you know the show is going to be livestreamed on YouTube. But at the same time, I can’t wait for the show. The hard work and enthusiasm of my team makes me confident that we’re producing a great night of talks and God knows it’s nice to have something new to look forward to!

‘How it’s made (Entry #1)’ says that the hard work is made worth it by “a pub full of people”. Whilst such an anticipation takes on a whole new, melancholy meaning this year, there is surprisingly little Covid-resentment amongst our team. An online festival brings its own novelties: we can use interactive software to poll the audience mid-presentation; we can stream the presentation across the world, allowing more than a pub’s worth of Leeds residents to experience the talks live; and, of course, the drinks are cheaper at home. The closer we get to the festival, the more I feel like – this year – all the hard work will be made worth it by a livestream full of people.

This post is just a tiny glimpse at the hard work that goes into the festival: the experience of a single team in a single city planning a single event (one of hundreds around the world). The scale of Pint of Science, even in an online year, is pretty staggering. When people still talk about scientists as uncommunicative lone wolves, I sometimes wonder who they’re referring to. If such scientists do exist, I wouldn’t pay them any mind – they're increasingly outnumbered by those who can’t wait to share with you.

Alex Wakeman is a geneticist and plant scientist, currently working on his PhD at the University of Leeds. His research focuses on understanding how genetic and hormonal function in plants results in physical structures such as branches and seeds being created. When not spending time with plants, Alex enjoys running, reading and semi-regularly uploads science-focused posts to his lab’s blog. You can find him on Twitter @al_wakeman.